…sometimes, I just don’t get what the cards are trying to tell me.  Sometimes I ask my question, shuffle the cards and am just stumped when a certain card appears.  Like I have no clue why that card is in that position to answer this question.  Like it makes no sense whatsoever…

And, yes, this is totally normal.

This is just one reason why every tarot book and reader will recommend keeping a tarot journal so that you can reflect back on the card at a later time to see if it made sense.

And I agree with this, but I also think that sometimes your words are just not enough.  For so many readers out there, but not everyone of course, the images in the cards play such a pivotal role.  So just writing about the cards will help give you some perspective, but I believe taking pictures of your cards can be that much more helpful.

Now I’m not talking about instagram or blog worthy photos for every card you draw.  Just snap a quick picture for your eyes only so that you can go back and visually see the connections later.

As an example, my daughter had a routine MRI (yeah, MRI’s can become routine when you have a child with a shunt) and a doctor’s appointment today, so last night I drew two cards from my trusty Rider-Waite-Smith to ask what the energies surrounding this event would be. 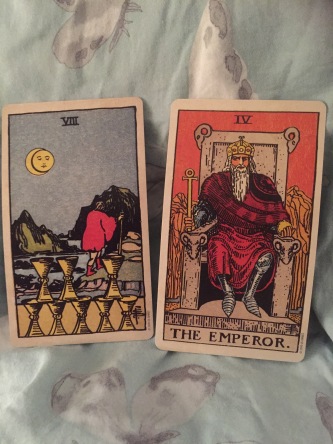 I was stumped by the first card, 8 of cups, but pretty well understood the second card, the Emperor, stood for the no-nonsense neurosurgeon who would conduct his appointment efficiently and quickly.

It wasn’t until my daughter’s actual appointment time that the meaning of the 8 of cups dawned on me.  This was our first appointment for an MRI at this children’s hospital, so we were not very familiar with their procedures.  When we got into the patient waiting room I was informed that in this hospital they do not allow the parents to go with the kids to watch the MRI, instead I would remain in the waiting area.  This was the first time I did not go with her and the image of this card definitely rang true!  There was my girl going off all by herself.

Since I had taken a picture of the tarot cards the night before with my phone it was convenient for me to take a quick look at them while my daughter was away and confirm my thoughts.  Yep, now that 8 of cups made perfect sense and their could not have been a better card chosen.

Are there times when you just don’t know what the cards are trying to tell you?  Do they sometimes make their true message known at a later time?